I try not to focus on headlines, but rather on economic data itself. That being said, inflation will take the mainstage for many years to come and I am happy to share my opinion:

We are not big believers in material inflation: in general, we expect U.S. inflation to stabilize in the 2%-3% range over a multi-year period. However, we believe the market will become particularly concerned about rising inflation in the coming weeks. First, there will be a second-derivative turn in most inflation metrics as base effects drop out of year-over-year price levels. Second, there is a clear reflationary impulse evident in the commodities complex. Third, a weaker USD will support some mild inflation. Fourth, we’re seeing price levels creeping higher in several components that contribute to the measurement of inflation, in particular in segments that have been expose to supply chain disruptions and ongoing pressures in health care costs. Fifth, the Fed’s widely expected announcement in August/September that it will target 2% inflation “more symmetrically” —meaning it’ll tolerate a persistent overshoot of 2% inflation—will exacerbate this concern.

Market Implication: A stagflation scare may tactically push up nominal U.S. yields to the upper end of their recent range, particularly at the long-end. We expect various forms of assets with inflation protection qualities, like gold, to continue to do well. Longer-term, we don’t foresee a prolonged period of reflation, but we recognize there could be tactical opportunities for the reflation trade. 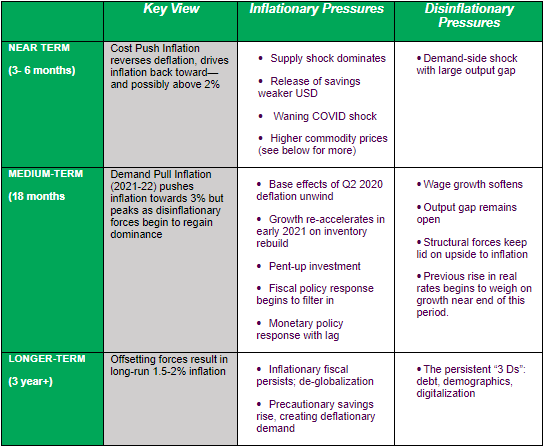